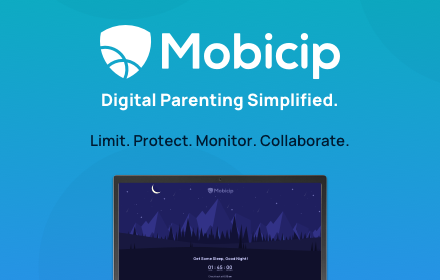 Researchers, pediatricians, teachers and even the US Senate have decried the influence of ‘Big Tech’ on kids and teens. A deluge of social media, screen time, and internet has invaded the lives of families across the world. From phone manufacturers to streaming media to social apps and websites, Big Tech’s goal is to do everything in its power to increase user engagement, despite its own internal research and employee feedback pointing out the harmful effects on children. How can busy parents deal with this challenge, amidst everything else going on in the world and in their families?

Mobicip, a pioneer in parental control software, has launched the most comprehensive solution for families to build better digital habits.

“For far too long, Big Tech has paid lip service to the scourge of mental health issues they are causing,” says Suren Ramasubbu, founder and CEO of Mobicip. “Not anymore! The voices of parents have reached a crescendo, and Big Tech has no choice but to listen to and act on it.”

Mobicip has advocated for more transparency and open APIs that allow third parties to hold addictive tech products and the companies that make them accountable. It is high time that parents take matters into their own hands and use tools like Mobicip to simplify their family’s lives. In a post-pandemic world, it is time to return to the basics - free play time away from screens, real social engagement in lieu of virtual, and protection from the caustic echo chambers of the internet and social media.