Articles in this section

How do I update to the new version of Mobicip?

How do I update to the new version of Mobicip?

This article explains how you can update Mobicip app in your device to the newest version.

Updating to the new version will allow you access to a host of new features that we have included after carefully analyzing the feedback from Mobicip parents all over the world. While we understand changes are hard, we promise you that we tried our best to make this one safer and more secure for your family and easier for parents to manage their family devices.

Updating to the new version is absolutely up to the parents will but we, at Mobicip highly recommend it - so that you don't miss out on the amazing new features. The new version of Mobicip app offers Social Media Monitoring, App time limits, Schedules and a lot cooler and interactive dashboard for both Parent and Child.

NOTE: Please note that your old Screen time configurations will be lost after update, but your internet monitoring settings like allowed/blocked websites, network exemptions will be carried over.

Updating to the new version is possible from both Parent app and web portal. All you need to do is log in using your parent account and you will be prompted to update to the new app.

Click on the 'See What's New!' button and follow the instructions on the screen to check out all the features offered in the new app and proceed with the migration.

Please note that this action is irreversible. Once you decide to update the app, it will not be possible to revert to the previous version. However, if you choose to stay on the previous version, you need not worry. We will still continue to support the old version as well. You will have ample time to analyze and update to the new version. You can always reach out to our support team if you face any difficulties while trying to migrate to the new version or if you have any questions about migrating to the new app.

If you decide to upgrade at a later stage, you can click on 'Not Now' and we will remind you again after a week.

If you still need some time to decide whether you want to move to the new app or not, just click on 'Maybe Later'. But you need not worry, you will always have the option to upgrade the app at a time of your choosing. 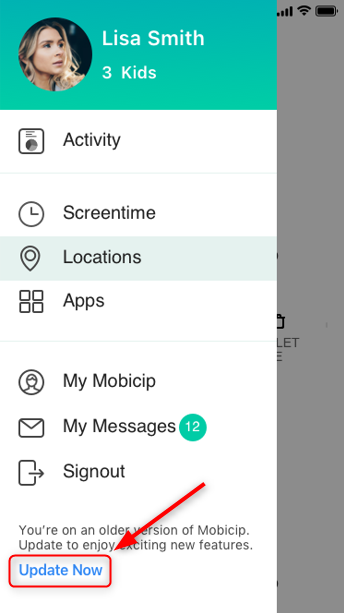 Just select 'Update Now' from the app or the web portal, whenever you feel like you are ready to check out the new features that we have waiting for you with the upgrade.

Before you migrate to the new version, let's give you a gist of what all cool features are waiting for you after the upgrade.

Reviewing your child's daily activity just got a lot more simpler and interactive. With the new dashboard, you can view your child's schedules, goal progress, daily screen time usage, and adjust settings on the go.

With Mobicip's social media monitor features, you can monitor your child's Instagram, Facebook and Snapchat's (Snapchat available only for android devices) activity real-time and detect potential risks from cyberbullies, online predators, and more. Mobicip will actively monitor and alert you about dangerous posts on your child's social media account.

We believe managing is better than restricting. The screen time restriction has been replaced with schedules. Use schedules to organize your child's day. Multiple schedules can be created for each day with each schedule allowing access to specific apps and websites.

Using Mobicip's Daily screen and App limit feature, you can help inculcate healthy screen habits in your child. This feature allows you to set the maximum screen time allowed per day and also set daily time limits on apps. The child also has an option to request for grace time which can be sent as a request with an explanation for the same.