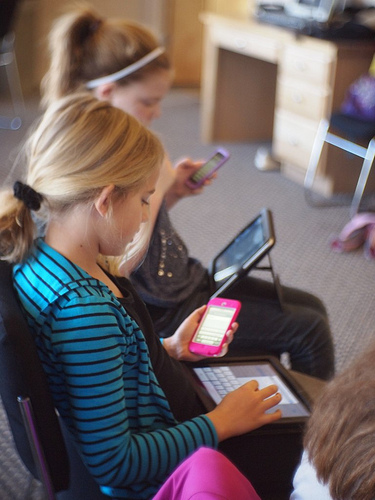 Impediments have a peculiar way of cropping up. You weed out one and another crops up. Come to think of it, overcoming hindrances makes a system stronger.

Education is on the brink of a great transformation as mobile learning is becoming an integral part of in-class and after-school education. 73% of (Advanced Placement) AP and (National Writers Project) NWP teachers say their students use smartphones in class or to complete assignments.
But the primary obstacle to this is the persistent digital divide. Assessment reports prove this. A Pew Internet survey of middle and secondary school teachers shows that
Happily, due to extensive access to smart phones and tablets this divide is narrowing down. But, as mentioned overcoming one obstacle exposes another.
Reducing the digital gap has hardly improved the academic performance of students in the low income strata schools. They appear to be wasting time on these gadgets when compared to their more affluent peers.
Vicky Rideout, in a New York Times story on the issue of study of online patterns said, “Instead of closing the achievement gap, they’re widening the time-wasting gap.” This new hindrance is such a serious cause for concern that the Federal Communications Commission is looking at a proposal to spend $200 million to create digital literacy corps who will spread out to teach parents and students the fruitful use of educational technology.
One viable option is to enable a parental control app like Mobicip's Safe Browser to filter content and limit online time on these mobile devices. Every parent has to decide on their own. Get right or get left out of the great leap forward.
Shaila is a blogger at Mobicip - the #1 parental control service for iPhone, iPod touch, iPad, iPad mini, Android-based tablets and smartphones, Kindle Fire, and Windows laptops. Shaila loves to write about mobile learning and the increasing adoption of technology and the internet in families.
(Photo credit: flickingerbrad / Foter.com / CC BY)
Tags :
Parental Controls Mobile Learning