Is Your Teen a Cyberbully?

Share
Teens have a secret life. Much as it may be hard to digest for parents, a trot down memory lane into one’s own teenage will prove that there are some circles in the teenager’s life that exclude parents. As long as the secret life involves crushes, an occasional beer at a friend’s party, or even safe physical relationships (parents may remove their head from underground), it could be harmless in the long run (the watchwords being “occasional” and “safe”), although there may be some fire fighting involved in the immediate future. 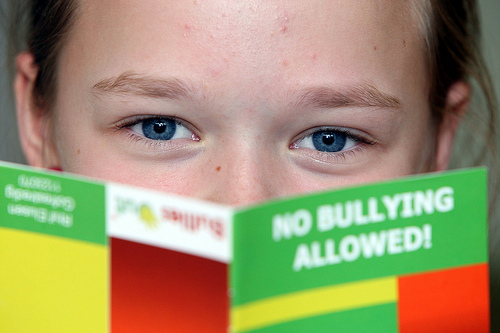 There may, unfortunately, be secrets that are not as harmless. Perhaps the greatest fear for a parent is that their teenager hides the fact that she has been a victim of a crime or, in this time and age, cybercrime – cyberstalking, cyberbullying or worse. A recent research by Intel Security shows that parents are most concerned (28%) about their children unknowingly interacting with predators/pedophiles, while 21% fear them interacting with strangers in general. This concern is even justified because 27% of teen/pre-teen kids seemed to have no qualms about meeting people they have known only online. Thankfully, the net itself can offer solutions and there are hundreds of sites that guide the parent on how to recognize signs of the child being victimized and how to prevent it.
While it is natural for parents to want to protect their own children from becoming victims, it is rarer for the parent to imagine that their children could be perpetrators of the same misdemeanors that they fear their children may be victims of. This stems from the underlying trust that parents have on the general goodness of children. It is indeed right that parents must trust their children, but it is also important for them to realize that the line between good and bad is never solid and it is easy for a child to cross over, even if unknowingly, into the other side. Intel Security’s finding that 35% of youth admittedly bullied people on social media, attests to this.
Although both real-world bullying and cyberbullying are rooted in aggression, there is a difference between the two. This difference arises from the anonymity possible in the Internet.  A real-world bully is most likely a maladjusted child who does not mind being known as (even perhaps revels in being called) a bully.  The anonymity possible in the internet is conducive for even real-world non-bullies to experiment with bullying, perhaps as a mark of rebellion, without  the associated penalties. Another incentive of the Internet to bullying is that online conversations lack visual cues associated with response and emotions. This can lead to insensitivity to the impact of words on the feelings of the respondent.
Anonymous harassment is not the only form of cyberbullying that teens may practice. Making rude or nasty comments toward someone or intentionally embarrassing someone else in retaliation for a perceived wrong are also prevalent online. The Intel study shows that 61% of the children who admitted to bullying others did so because the recipient was mean to them, and 26% did so because they did not “like the person”.
Why should a parent be concerned if the teen is suspected to be a cyberbully?  Bullying is one of the DSM-5 criteria for conduct disorder. It is a known fact that real-world bullies have certain undesirable personality traits such as frequent or early alcohol use, cigarette smoking, fighting, below average academic achievement, depressive symptoms, excessive psychosomatic symptoms, and neuroticism. In 2004, Michele Ybarra from Johns Hopkins Bloomberg School of Public Health and Kimberley Mitchell from the University of New Hampshire examined the psychosocial characteristics of North American youth engaging in Internet harassment;  the results seen in the following table are reasons enough for parents to be concerned. 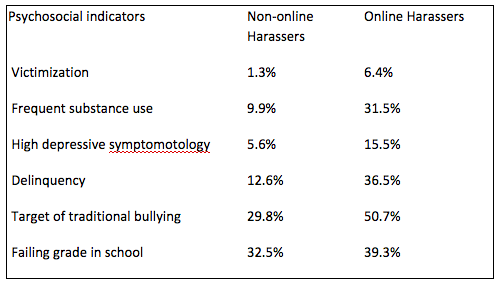 What is worse than the above psychosocial indicators is that the stealth mentality can lead to greater ethical and moral compromises and  development of Callous-Unemotional (CU) traits that include lack of remorse and empathy, callous use of others, and shallow emotions, which are considered precursors of adult psychopathy.
There has been proof that there is a connection between caregiver–child relationships and online behavior of the child. Lack of emotional attachment and rejection are associated with bullying, aggression and delinquent behaviour in children, and there is no reason to believe that it could be otherwise in the case of cyberbullies as well. Insufficient or inefficient monitoring by parents has also been associated with bad behavior in children and this is even more applicable in the online world. In a survey of youth  engaged in online harassment activities, seven percent of the cyberbullies indicated that their caregiver rarely/never knew where he or she was, and 9% reported their caregiver sometimes or rarely/never knew with whom he or she was with when not at home. Harsh and erratic discipline practices can also lead to online aggression among children.
It is important for us as parents to be careful that our children do not become cyberbullies. The relationships between parent (or indeed any caregiver) and child, including discipline, monitoring, and emotional attachment, play a strong role in the way the child behaves online. It is important to teach our digital natives that contrary to the popular lore that words, unlike sticks and stones, need never hurt, they do. Cyber bullying and anonymous harassment are actually crimes punishable by law, and the child must be aware of this, but beyond law enforcement, it is basic human courtesy to “be nice” to people both on and off-line.
Photo credit: Working Word / Foter / CC BY-ND
Tags :
Parental Controls