Summer Travel in a Digital World

I return after a much-deserved, hectic, but exhilarating vacation in Florence.

I remember a time, many years back, when I left my home country to pursue higher studies in the US. This was the era when emails had just started making forays into big companies in my home country, and snail-mail was still the most prevalently used form of communication (Yes, that many years back). The process of applying for admission in grad-schools started a year before I could go, what with pouring over catalogues found in the American Consulate in my home town, choosing universities, based on whim, writing to these universities for brochures (“pre-ap”), getting them months later by the post, narrowing the list of Universities to apply, applying, again by snail mail, and waiting with bated breath for months before the replies trickled in. That was half of the story. Then came months of sending snail mails to the International office, the university, the dorms, and all and sundry in the neighborhood, visiting the travel agent many times, traveling to the adjacent town to get winter wear etc. Little wonder that I needed a vacation the moment I landed in the United States. 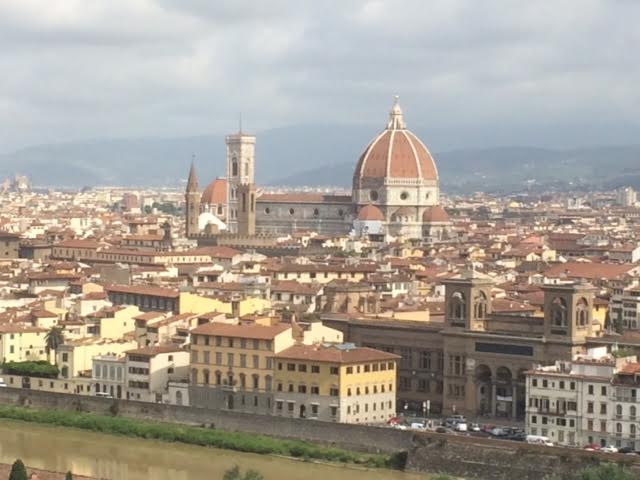 A far cry was last week’s trip through the Tuscan countryside, which took me past cathedrals, more cathedrals and yet more cathedrals, with fine Chianti red and pizza thrown in for good measure, which was organized within a couple of days, with many a click on a laptop and a few phone calls. The digital age has indeed taken convenience to another level in travel. The Internet and digital tools were instrumental in taking someone eminently capable of forgetting to pack passport and underwear, to distant lands and back home in one piece, with lots of memories and thousands of digital photographs that sit in the smart phone, waiting to be categorized, labeled and WhatsApped to the lucky people on the contact list.

With a laptop with broadband Internet, I could not only plan my trip meticulously, booking flights, hotel rooms, foreign currency and guided tours, but also learn of the weather and gelato, even the menu at the local restaurant. I could read blogs of people living in the Tuscany area to get insider information on the best places to eat, drink and be merry.  I could get an appointment for wine tasting in an authentic Chainti vineyard and arrange for time travel to the Medieval era, brushing shoulders with Machiavelli and Michelangelo and set eyes on the discoveries of Galileo, while paying homage to his grave. All within two days, from the comfort of my office room.

While in Italy, the offline map not only told me where exactly I was at any point of time, but how I could get from where I was to the next place that caught my fancy. I, who gets lost in my own backyard, never once wondered where I was, because big-brother google maps was watching out for me – perhaps I need to install google maps for my backyard. International roaming on my cell phone, and a pocket-sized battery charger, augmented by Wi-Fi in airports, hotels and museums, ensured that I could be reachable at all times on my cell phone. Digital locks to my hotel room and luggage, point-and-shoot camera built into the smart phone, that could do everything short of brewing my coffee (a business opportunity there, don’t you think?), digitally encrypted cash card, noise cancelling headphones (to drown the guide – who needs a guide when there is Wikipedia?), my entire library in my kindle, for those abominably long transit waiting times in the airport – is it any wonder that the trip was one hundred percent digital?

Yes, I am glad I got to make my dream-trip in the digital era. But was it all good? On a practical and pragmatic sense, yes, it was. But there was a pesky voice in my head wondering if the romance and the element of surprise were missing this time, as against last time I travelled to a new country. The last time I did sans digital tools, I was awed at every little thing I saw – the broad roads, the speed of cars, the accent of the locals, the sunlight at 8 PM. To my 12-year-old daughter, for whom, this was the first trip abroad, nothing was awe-inspiring, not the flight trip (except all the movie channels she could flip), not the roadside pizzerias (“Pizza Hut pizza is different, isn’t it?”) or the many Duomos that dotted the landscape in all directions ("yeah, I can see that in the satellite image"). They’ve all been seen on YouTube during the preparatory few days.  But that is not the worst of it, some like me are romantic enough to be awed by the sight of a sparrow on the sidewalk (“look, we have a sparrow just like that one back home…or is it the same one?”) and some less so (“David didn’t look so naked in photos online”); it takes all kinds to make the world.

What was worse was the reign of photographs and selfies. The wood was definitely missed for the trees. There were thousands thronging the museums, the galleries and the piazzas, but there were not many seeing the exhibits without a cell phone camera between them and the exhibit. If the cell phone was not focused on the painting or sculpture or sparrow, it was focused on themselves, either held on hand, or on a stick, against the backdrop of the painting or sculpture or sparrow. I did not hear a single sigh, or gasp (not even my own), because the focus was on proving to the social media world that he/she has been to see David and the Duomo. I post, and so I am !

Another technology-induced malady was staring at the cell phone, either at the map (I plead guilty), or tweeting or facebooking, while acres of vineyards loomed ahead. While I had anticipated that I would go to bed every night with sore legs, the neck pain with looking at the hand-held device was unexpected. While international roaming and WiFi did offer me the comfort to be in touch with loved ones, the collateral damage was calls and emails from work clients – constant connectivity is not always a boon. And finally, perhaps it is not such a bad idea to get lost now and then, within reason, of course. Having everything planned out to the last tiny detail obviates the element of surprise that is essential to any adventure.

Lest I nit-pick, technology is the best aid for travel, in terms of convenience, safety and preparedness. However, what is most important in travel is savouring it. Experience is more important than external affirmation, and it would help to remember that what the mind stores can release endorphins on demand in future. Devices are merely aids towards getting the mind to store the memory.