The parental instinct, across species, includes specific actions associated with concern for their offspring: establishment of shelter, provision of nourishment and protection from natural enemies. While shelter and nourishment are, to a large extent, invariant across all life forms in the holistic sense of the term, the idea of protection take on many hues beyond “natural enemies” in the human race and ranges from justifiable species preserving concerns to paranoid parenting, sometimes the former morphing into the latter, especially in new environments. Such is often the case with the online environment. 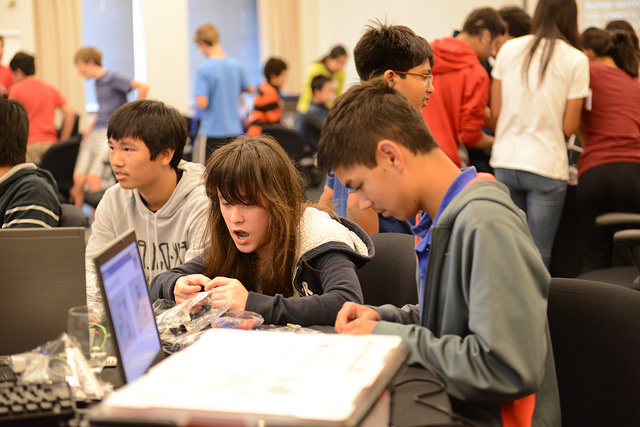 While the utility of the Internet as a veritable source of information is indeed indisputable, the risks are very real and serious. There are three main risks associated with internet, especially when used by children – the loss of data, financial dangers and vulnerability to exploitation.  While social law enforcement agencies do indeed proactively seek to meet the challenge posed in a constantly evolving domain, the primary responsibility for protecting children rests with parents.

But before embarking on an extensive battle plan to counter threat, a parent must be aware that there are as many myths about the risks of technology as there are hyperboles. The myths are largely a result of salacious, sensation-mongering media headlines of rare or unusual events that are often caused by gross mismanagement, rather than common-sense actions. Before succumbing to mass hysteria, the parent must understand that such events are but outliers and do not represent common threats that are less sensational, but perhaps more damaging in the large picture. A logical analysis is very essential to contextualize the good and bad of the Internet and technology in general, so that a rational plan may be formulated to protect without restricting the young. This is particularly relevant in the present times where the online environment extends across several technological platforms.

Kaspersky Lab and B2B International recently conducted a survey of consumer security risks in the context of the multi-device world. The survey was conducted on internet users from 23 tech-savvy countries of the world. The caveat of “multi-device” is justified by the statistic that 77% of participants (~8600 of the total of 11135 people surveyed) used multiple devices to connect to the internet, at the same time. The good news was that 92% of the people used some form of internet protection on their Windows computer, but the bad news is that not as many protected computers with other operating systems, tablets and smartphones. Considering that twenty thousand malware are detected on Android OS every month, this does not bode well for users of non-windows devices without protection.

Loss of data from unprotected devices results from actual physical loss of the device itself – the survey reports that 18% of losers of devices were young people in the age range of 16-24, and through cyber attacks. Considering that more half of the people who used devices admitted that they value the data on the device more than the device, with 38% storing extremely confidential and important data, it is common sense to preserve the device as well as the data carefully. Protecting data involves a simple step of always using virus protection software on all devices.

The internet has evolved from an information repository to a virtual market to buy anything ranging from utilitarian items to ridiculous things such as  people to stand in line for you.  98% of users surveyed by Kaspersky have used the Internet for some form of financial transaction.

It follows naturally that children have started using the Internet for shopping as well.  Six in ten children have been reported to shop online with 54% of kids purchasing mobile apps and make in-app purchases and 41% using a mobile device to make general purchases. While smart phones manufacturers offer various tools to parents to monitor and manage the online financial activities of kids, a Microsoft survey shows that 77% of respondents are clueless and seek help from technology companies to manage their children’s app activities on their smart phones.

Stranger–danger is not new to digital parenting, given the long history of fears regarding strangers in the real world; this is perhaps the only true instinct that human beings have towards protecting their children. Legislators, families, communities, and law enforcement agencies strive to alleviate this fear and obviate this threat through various rules and regulations, both enforced and recommended. The Children's Online Privacy Protection Act (COPPA) in the US, for example, is designed to protect the personal information of a child, such as name address, phone number, social security number etc. and no site may collect such information from children without a parent knowing about it and agreeing to it first. But as with any governmental regulation, the primary route towards online safety is parental awareness.

The most feared risk of safety is Internet-enabled sex crimes against children and sexual predators.  Although these are very rare, it is the most seriously considered threat of the internet. A more frequently occurring event is exposure of children to age in appropriate content that may be either sexual or violent in nature. The National Center for Missing and Exploited Children in a 2006 document titled “Online Victimization of Youth, Five Years Later”, reports that unwanted exposure to sexual material is the most frequent incident that jeopardizes the safety of children.

Another underestimated albeit prevalent risk for children online is their susceptibility to cyber bullying. Netsmartz411.com, an online site helps educate parents about internet safety, reports that cyberbullying is of various types and includes sending negative or hateful messages and threats to children, spreading lies about them through social networking sites, leaving troll comments on social networking and blog sites, or in the worst form, creating a website to ruin the child’s reputation. The National Center for Missing & Exploited Children reports that online harassment of youth ages 10 to 17 has increased in the last five years

It is very important for every parent to realise that while the power of the Internet in child development is immense, children definitely need extra guidance in their online ventures, because of their vulnerability. Many tools are available that allow parents to monitor and/or control their children’s access to online sites and every parent must be aware of them.   But beyond entirely relying on external support to protect children from the risks of the Internet, it is very essential that the parent participates actively in the online activities of the child.  For the uninitiated parent, there are many online sites such as Safekids.com and Netsmartz411.org, and FBI’s kid safety site that can offer tips and advice to parents to ensure safety of their children online.