We are happy to announce that Mobicip' Safe Browser 2.8.1 is now

If you have previously downloaded Mobicip, you can download the update for free by using the same iTunes account as before. 2.8.1 is an important update as the following critical issues were resolved:

This feature has been requested mainly by students and schools. Apparently, students want to open PDF files in their favorite application like iBooks or GoodReader, some of which allow the PDF to be edited. In version 2.8.1, opening a PDF (or DOC, DOCX, XLS, PPT, etc.) displays an "Open in" button at the top right of the screen, like this: 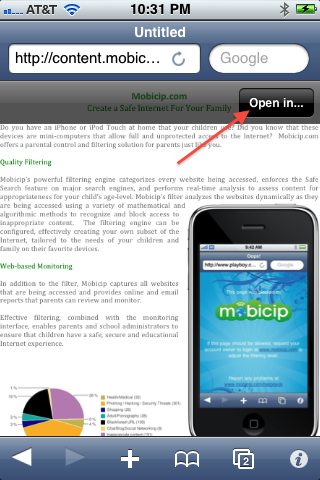 Touch the button to select the application you would like to open the file with. 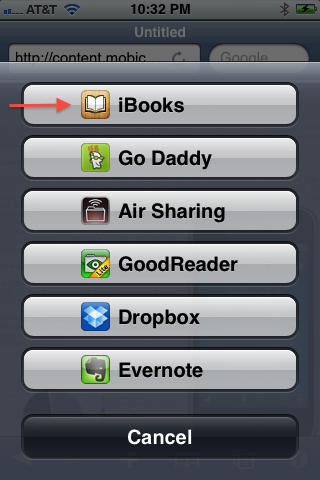 You should now be able to view the file from within the selected application, like iBooks for example. 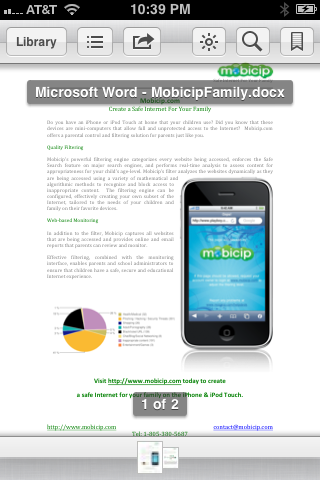 As some of you had reported, certain websites were not being rendered correctly on iOS 5. This would not have affected a vast majority of users, but for those who noticed the problem, it could have been very annoying. Luckily, we were able to identify and fix the problem quickly as part of the 2.8.1 update.

Error Connecting to the Network Issue

Many thanks to the users from the UK, middle east and asia who reported a vexing "error connecting to the server" problem when they set the device time to a zone that did not correspond to their location. We did resolve the problem a while ago, but it wasn't a big enough problem to merit an update on its own. The fix finally got out during the 2.8.1. update.

Some users ran into an unrecoverable crash during authentication after changing WiFi networks, mostly in school environments. Thanks to all the schools that worked with us, provided crash reports for investigation, and tested the beta version before we rolled out the update. The issue is now resolved as well.

Thanks for your patience as we resolved these issues. Please download the latest update and let us know what you think.