Families and the Internet

The millennial generation in developed (and rapidly developing) countries, also called “screenagers”, are prolific users of the Internet and engage in the Internet for four categories of activities: entertainment, education, and edutainment/infotainment and as the neo-portmanteau goes, “gamevertising”. Amongst such youngsters, the Internet remains largely a home based activity. This means that family plays a critical role in the interaction between children and the Internet. 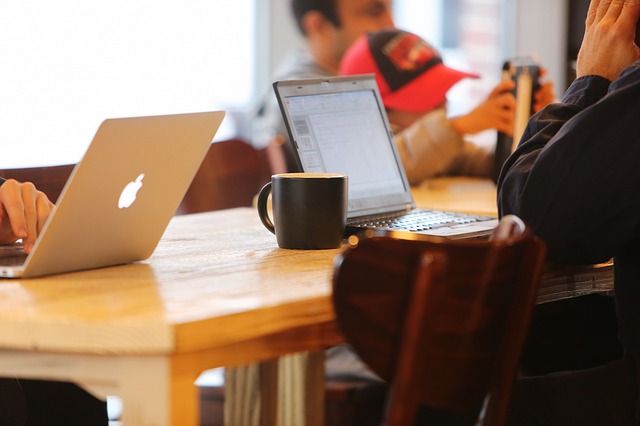 How much and how does family affect the proliferation and consequences of Internet insurgence into the home? A simple web search with the keywords “family”, “affect” and “Internet” spews out eleven million pages, almost all of which deal with how Internet affects family life and not vice versa. There have been few scientific studies on the effect of family on the Internet use among children; much of the existing studies largely deal with familial background vis-à-vis Internet addiction/overindulgence – e.g. this, this and this – and point to the obvious fact that a dysfunctional family causes Internet addiction in children.  At best, there are a few studies that relate the effect of parental attitudes on the general Internet use in children. Quoting Barkin et al. (2006) “Little is known about parents’ role in mediating their children’s media use”.

The use of the Internet by children is directly related to the availability of Internet at home. This is, in turn, significantly influenced by the age, educational level and economic-status of the parents. Parents with a good knowledge base of the Internet and technology typically focus on guidance, control and support. Such parents are usually younger, educated and economically comfortable. The number of children in a family also affects Internet parenting styles. In larger families, less control and support is observed in relation to Internet usage. The gender of parents clearly affects the Internet usage among children as well. Valcke showed that parental control differs between fathers and mothers, with mothers providing more guidance and support. More interestingly, at least in developed countries, there seem to be no differences in Internet parenting control and style between boys and girls. Valcke and co-workers report four “Internet parenting styles”: 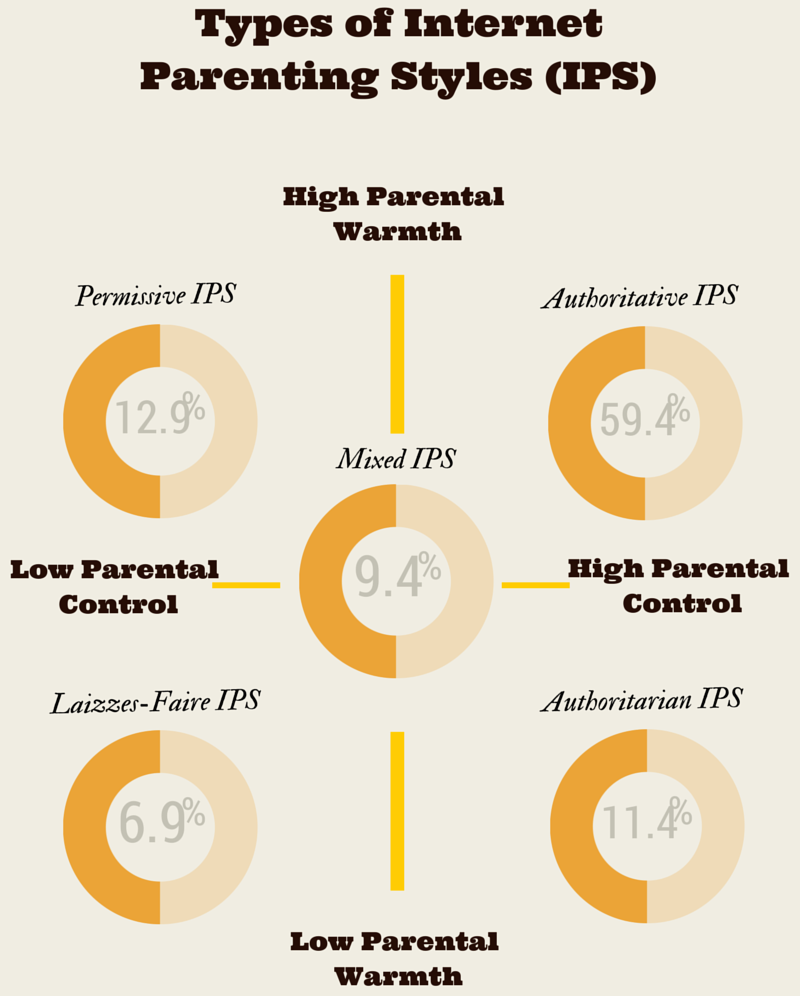 “Laissez-faire” points to “low levels of control and low level of involvement”. The effect of parenting style on Internet usage was found to follow the pattern below. 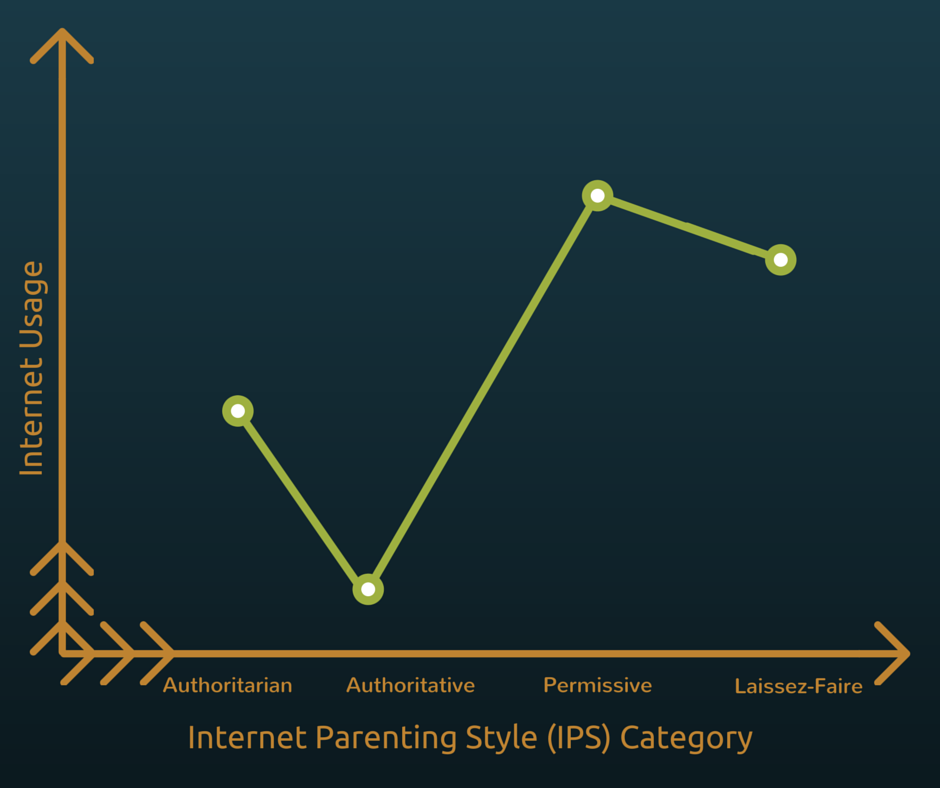 The Internet can be a tremendous help to parents in parenting. Studies have shown that the Internet can not only enhance knowledge but also attitudinal and behavioral aspects of parenting; Knowledge can be improved by web-based training programs, while changes in attitude and behavior may be positively influenced through web based intervention programs  guided by therapists or coaches. Information pages, e-mail consultations and digital training modules are some ways by which professionals may disseminate current knowledge and offer tailored advice, which can easily be augmented by peer support through group forums and discussion boards.

Nowhere else in history has there been a reverse relationship between parent and child as in the domain of the Internet.  The common belief that the child learns from the parent and influence primarily flows from parent to child is often negated in the area of Internet. There is now “reverse socialization”, where younger people influence and alter their elders’ views and behaviors. Mead (1970) described societal and cultural conditions that lead to reverse socialization. The youth in a prefigurative culture, where people are faced with unfamiliar and significantly changed circumstances, primarily focus on the present and future and are less bound to the past than their elders. Thus, children lead the way rather than follow in the footsteps of their elders in such fields, arguably creating a significant reversal in the parent-child knowledge hierarchy. Considering that the generation divide favors children, with 92% of kids confident in the Internet playing field, as against only 62% of the parent generation, there is a drastic role reversal with children often donning the garb of a “home guru” in matters pertaining to the Internet.

The effect of such role reversals depend on the general character of parent-child relationships. Optimal socialization occurs in families in which respect between parents and children are mutually high. Authoritative and permissive parents communicate more with their children about consumption than authoritarian and neglecting parents and thus children of the former are more apt to teach their parents about the Internet and act as Internet brokers to their parents.

The effect of the Internet on family, as mentioned before, has been worth 11 million pages on the Internet and these studies often provide conflicting insights. A survey of American households reports that new digital media technologies negatively impact family life. Ironically, the same study also reports that networked parents and children connect with each other in new ways such as email, IM, and mobile phones, resulting in better emotional health. The Internet has undoubtedly enhanced parents’ monitoring capabilities, even when they are geographically separated from their children. However, the very same connectivity can adversely affect the autonomy of the “tethered” child due to helicopter parenting.

The insurgence of the Internet into childhood has indeed caused a paradigm shift in parenting, affecting interactions among family members, parents’ role in their children’s lives (and vice versa), and the definition of parental authority. The evolution of new family systems and values will be a natural outcome of this change, and after trial and error efforts, an optimum setup will eventually emerge to preserve the health and sustenance of the human race. Until then, it is up to adults to cautiously test the waters and develop systems best suited for them and their families.